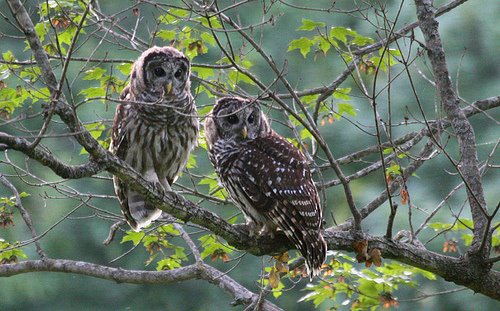 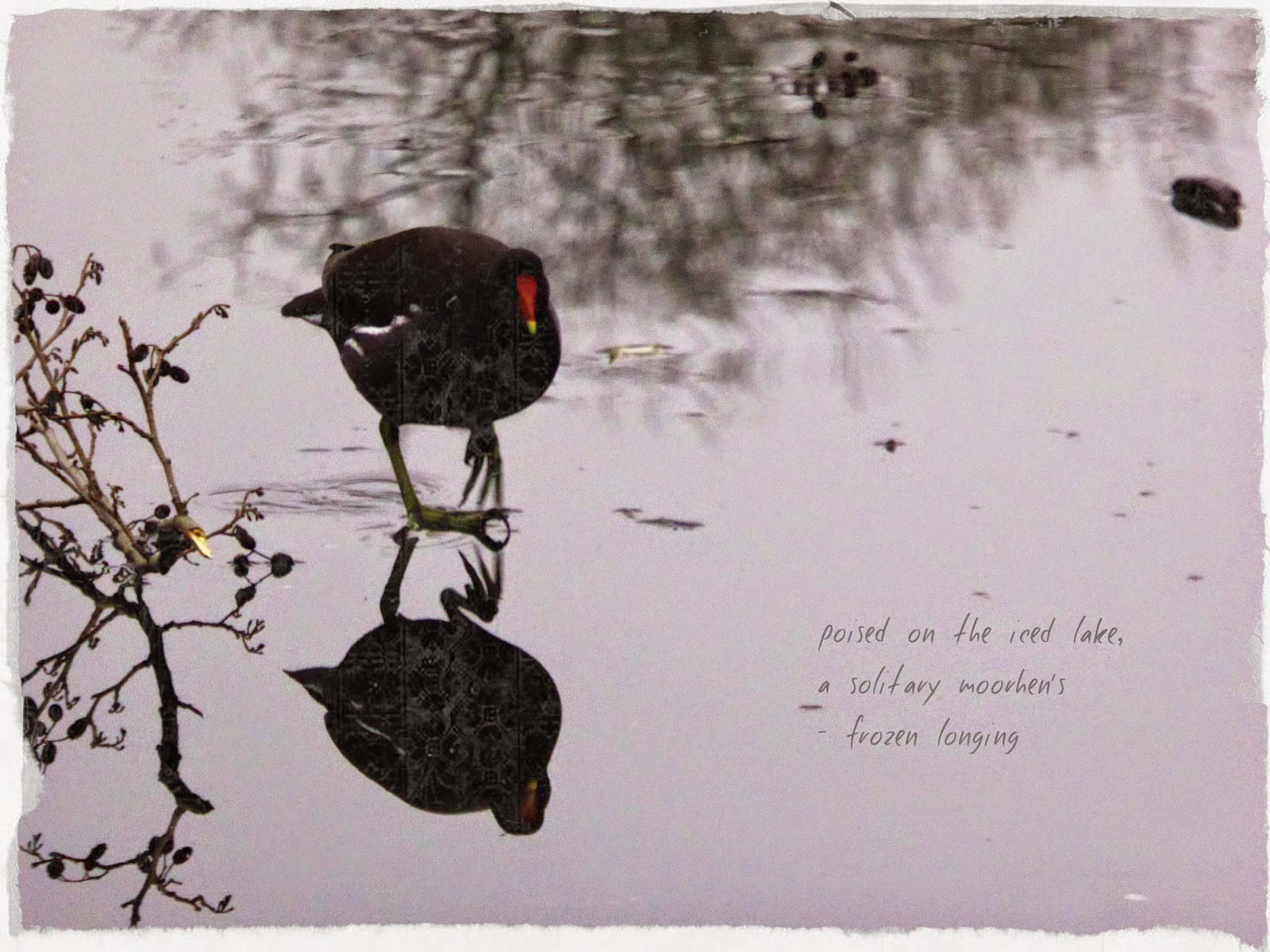 posed on the iced lake,
a solitary moorhen's
-frozen longing

all the magic of

again,  in his arms

another fading winter
-the purple crocus


lilies swaying in the air--

unfolding from a green leaf

the scent of rain


on his eyes and mine
although we are far apart,
a glint of the same moon

Lawar is a traditional delicacy of Balinese cuisine which is served on special occasions and ceremonies. “Bani ngajeng lawar?” (“Are you brave enough to eat lawar?”) is a  question often posed with a mischievious grin  to foreign guests, as lawar is, for many, an acquired taste.
The basic ingredients for lawar are pig's blood and an assortment of traditional Balinese spices such as shrimp paste,  kunyit, turmeric, salt and pepper, galangal and other roots; grated  coconut, green beans, boiled jackfruit and singkong leaves. Different types of lawar are made with chicken, duck,beef, pork or turtle meat.
In Balinese culture tradition dictates that certain types of foodstuff be prepared by women, while others by men. The preparation of lawar is the duty of the menfolk, and on the day of a religious ceremony everyone rises at daybreak, the women to prepare the temple offerings, while the men sit in a circle chopping, mashing, generally socializing and sipping cups of fragrant Balinese coffee, while they cook.
Most lawar includes raw blood mixed with it, something not to the taste of all modern Balinese, some of whom prefer their lawar vegetarian.  Of the many types of lawar, the most unusual is the one made with dragonfly.


The Pawukon is a 210 day calendar that has its origin in Java, but it is still today widely used by the Balinese. The calendar consists of 10 different concurrent weeks of 1, 2, 3, 4, 5, 6, 7, 8, 9, and 10 days. On the first day of the year it is the first day of all the ten weeks. Because 210 is not divisible by 4, 8, or 9 - extra days must be added to the 4, 8, and 9 day weeks. In Bali it is used to determine the proper dates of temple anniversaries and ceremonies, as well as the best day and time to make a fishing net, get married, start a business, build a house and other events both large and small.
There are 30 seven-day weeks in a wuku year, each with a different name. The origin of the weeks' names is told in the legend of Sinta, a woman who became pregnant after she dreamed she slept with a holy man, giving birth to a beautiful child. One day Sinta lost her temper when the boy misbehaved, and struck him, wounding him on the head. The child run away and his grieving mother searched for him in vain for years.
In time, the child became the powerful ruler of the country of Giling Wesi, where he was known as Watu Gunung (Stone Mountain). One day his wandering mother came to Giling Wesi accompanied by her sister Landep. Watu Gunung was so overwhelmed by the strangers' beauty  that he married them both, having in due time 27 children by his mother and aunt.
One day Sinta recognized the scar on Watu Gunung's head and became aware that he was her son and they had committed incest. To avert the wrath of the gods,  it was decided that Watu Gunung should marry the goddess Sri, wife of Wisnu, thus becoming a god himself, and free of the curse of incest. But Watu Gunung rejected this solution and declared war on the gods. Wisnu took command of the armies which he sent to punish Watu Gunung's arrogance and finally defeated him. To celebrate this victory it was decreed that his 27 sons be killed, one every seven days. Sinta wept for seven days and was received into heaven, so Wisnu added her name as well as her sister's Landep and Watu Gunung's to the 27,  and established the 30 weeks as an everlasting sign of his victory.


The construction of any gateway to a home or temple is an integral part of the surrounding boundary wall and the positioning of the gateway is an important element.
The basic design of any gateway,  is based upon a Hindu concept known as “Tri Angga” or three part, which is related to the human body. The top (head), center (torso) and the base (legs). This concept of Tri Angga” is carried out beyond gateway to other objects, which have shapes resembling the human from. It can be seen here that abstract art has existed in Bali for more than 900 years.
Traditional Balinese family compounds have only one entrance gate, on the side, bordering the street. The entrance defines the threshold between the inside and the outside,  and is viewed ambivalently, because while they admit welcome visitors, they may also allow in malign influences. And although the Balinese are known for their art and creativity, Balinese architecture is not subject to a great degree of decorative elaboration, with the exception of  doors and ornamental gates where much effort and expense goes into their ornamentation.
Doors are typically panelled and made from carved jack fruit, teak or rain tree wood. The decorative elements involve painting and carving, and in the case of palaces and temples or other important structures, such as the bale gede pavilion in the compound of a noble family, the ornamented surfaces may also be gilded with gold leaf.
In Balinese tradition, doors and gateways symbolize a demarcation between the realm of ordinary  life and some other plane of existence, whether it is sacred (in the temple), or political (as in the palace). One of the most striking images typically found over the monumental gateway of palaces and temples is a Bhoma head, whose fearful countenance is intended to drive away malevolent spirits.

Megamendung
Indonesian Batik
Indonesian history is heavily influenced by Chinese culture, the large ethnic Chinese population in many cities, brought with them their culture, many aspects of which then became assimilated into the local culture. Through the times, this process has left its mark in Balinese architecture, cuisine, dance, songs and fashion, and textiles including batik.
According to history, Cirebon, a city on the coast of Java, was famous for its harbour, where trade flourished with visiting Indonesian as well as foreign vessels. Cirebon, then known as the Kingdom of Pakungwati, was founded by Sunan Gunungjati (1448–1580) who was the only religious figure (Islamic leader) to become a king.  He used his reign to propagate Islam all along the Pesisir, or northern coast of Java, from Ciberon  to remote Pasundan.
One of Sunan Gunungjati's wives was a Chinese princess named Nio Ong Tien, who became an influential force promoting the artistic elements of the Ciberon court, and ceramics in particular.


The influence of classic Chinese ceramic motifs can be seen in Indonesian Batik, hence the blend of Ciberon-China batik designs with ornate phoenixes, cranes, peonies and a mythical beast part lion, part dragon and part bird. One the most famous Ciberon batik motifs is Megamendung, which literally means 'dark clouds'. Because of its association with rain, Megamendung,  symbolizes life as water for a parched land. Often the cloud motif is also combined with roosters against intertwined leaves and vines; usually in layers of blue, in different shades. Again, the colour dark blue, making reference to dark clouds and life-giving heavy rains, while the lighter blue is a symbol of hope for a brighter future.

According to legend, the Balinese originally only had the juice of sugar cane as food. Out of pity for the human race, Wisnu,  Lord of the Underworld, the god of fertility and water, came to earth in disguise, to provide them with better food.  Wisnu made love to Mother Earth to fertilize her and give birth to rice, she became known as Sanghyang Ibu Pertiwi, the Smitten Grandmother. Then Wisnu went to war with Indra, Lord of the Heavens, to persuade him to teach men how to grow rice. Thus rice was born as a gift from the gods and the principal source of life and wealth. Rice was born from the cosmic union of the divine male and female creative forces represented by earth and water.
There are four sacred directions, each represented by a different colour, red, black, white and yellow. God intended to give the Balinese rice in all these colours, but when Siwa sent a bird to bring the rice to the Balinese, the bird ate the yellow rice --except for a little bit which was planted under the eaves of its home. From the seeds grew kunyit,  turmeric. Thus yellow rice which doesn't grow in Bali, is prepared by mixing white rice with turmeric, and is the fourth type of rice. The other three are bras (white rice), bras barak (red rice) and injin (black rice). Yellow rice is essential for certain ceremonies and temple offerings, such as Kuningan, the last day of the harvest festival, Galungan.
The rice plant is considered a divine and animated female being which is treated with particular respect.  Each stage of its growth is carried out on an auspicious day and accompanied by appropriate temple offerings, in the same way as other rites of passage ceremonies are conducted for human beings.
After planting --by hand over several days- the first yellow-green shoots of rice begin to appear, and their little seedlings can be seen reflected on the water. It is at this time that the rice is at its most vulnerable from the birds, and scarecrows, wind chimes, bamboo bird-scarers and cloth effigies  are put up in the rice field, even people keep watch,  and yell at the birds to send them away.
Two months later the rice will have grown taller and green, it takes about five months for the rice to  mature and be ready for the harvest. After the harvest, the stubble in the fields is burnt or alternatively flooded, so that the old rice stalks slowly decompose under the water.
_________________________________________

to let in the moon

listening
to the sonorous silence
of snow piling up

on a windless night

fall around the trunk of the ash

into a deep lemon pool

in the hollow of the night